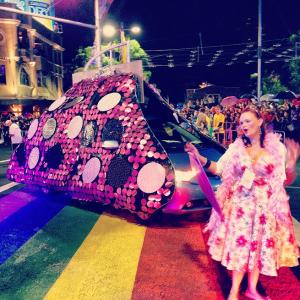 The movie, The Adventures of Priscilla, Queen of the Desert, has just turned 20 years old. When it was released, I was obsessed with it. I saw it 11 times at the cinema and owned just about every piece of associated memorabilia. At that time, I was deeply immersed in the world of gay rights (and Australian film). 2 years later, I would write my thesis on “Discrimination facing homosexual couples seeking legal family status” which earned me honours on my law degree. Although I was never at the forefront of the battle, it was a cause I represented in my spheres of influence and fought where I found it challenged.

Aside from the broader context of human rights, it was not my cause in so far as I am not gay although I did feel very much a part of the gay community. They were my peeps. There was something in the struggle for recognition and equality that resonated with me and put a fire in my belly. Perhaps their misfit with the mainstream felt akin to my own feelings of not-belonging. Perhaps it was my over-developed sense of fighting for the underdog. Or perhaps it was a whole mess of deep-seated psychological issues trying to play themselves out. Whatever it was, I couldn’t deny that I had an inordinate number of gay friends and an apparent magnetic pull towards them, and they to me. I saw this same pattern in with one of my sisters and other women of a ‘type’ that prompted me to note in my ideas book at the time “fat-girl/gay-boy”. It was my observation that there was something almost molecular about that relationship.

Fast forward to the end of 2010. I still possessed the power of walking into any room and walking out with a new gay best friend. My Priscilla collection had been joined by new favourites; Brokeback Mountain, Beautiful People and whole swag of other queer televisual and cinematic gems. Although I hadn’t elaborated on that “fat girl/gay boy” idea, it was about to blowup in my face and destroy my world as I knew it. My partner of 18 years told me he was gay.

The irony seemed too cruel. It would take a couple of years of counseling until I could consider the perspective that it wasn’t ironic but that it was perhaps because of who I was and what I stood for that I was the ideal person to escort him on his ‘journey to freedom’. Still, incredibly cruel nonetheless, especially as I was discarded in the aftermath like an old handbag as he took off somewhere-over-the-rainbow without so much as a forwarding address or backwards glance. It was made soul-destroying clear that I was not welcome beyond that point. It felt like I’d been kicked out of my community as he took custody of my people.

My world looked very different from the outside in, with nose pressed up to the glass, pleading to be let back in to where I belonged. But apparently I didn’t belong anymore. My service to the community fulfilled, I was ‘let go’. I hasten to add that this feeling was no doubt largely a matter of perspective. My friends did not abandon me though I had a few acquaintances shoot me filthy looks up and down with snide whispers that left me wondering what they’d been told.

Much has been written on my struggle elsewhere though it was only last year at the launch of my first photography exhibition that I disclosed the full reasons for our breakup. Prior to that, I had sought to protect his privacy but it became apparent that he didn’t ask for or want my protection anymore. More importantly, it was time to recongnise that this was my story and that of so very many women whose stories hadn’t been told. It was my turn to come out of the closet I’d been left in when he came out of it.

With this new perspective, I was able to look back on these films of my former life and see how myopic so many of them were when it came to the relegation of the aggrieved women. They seem to range between being naïvely cool with it and somehow deserving of their fate for being, well, women. After all, what a ridiculous thing to be! There was a decided lack of reality and compassion.

I was very fortunate to be taken in by the Women Partners of Bisexual Men support group run by the Leichhardt Women’s Health Centre – the only program of its kind in the world. We were originally a group of about 10 women and 2 counsellors. We were just one of several intakes for that year over the many years that the program has been running.

Despite the similarity of circumstance that bought us all together, as with any group, we represented a diversity of experience and opinions. We certainly had a couple of homophobes in our midst but way down the other end of the spectrum is where I met Sandy, a kindred spirits so similar that at times in the madness of grief, I wondered if she truly existed or if I just has some Tyler Durden thing going on.

When our partners told us, we stood by them as the best friends we believed ourselves to be. We put our needs aside to tend to their transition into a world we felt we knew that they perhaps, did not. When they were settled and thriving in their new lives and we made time to turn our focus on ourselves, we fell apart completely but when we reached to them for help, they were gone.

No one was telling that story.

Enter Monica Davidson. I first met Monica in her capacity as a business mentor to creative freelancers. We had a one on one meeting and I instantly felt that I found another member of my tribe, whatever that may be. I signed up to her course on Running Your Own Creative Business during which, she referenced a film she was working on. It wasn’t until the final day upon being asked that she told us what the film was about. It is a documentary called Hangbag which looks at that unique relationship between gay men and straight women. To hear my own cockamamie theory come out of the mouth of someone I so admired was startling – you could have knocked me over with a feather!

Afterwards, when the others had fallen away, I shared my story with Monica. I’m sure the click between us was audible as we talked ourselves deep down the rabbit hole. The conversation has continued since over many bottles of wine as Handbag continues to take shape.

Already 12 years in the making, Monica’s story about 4 generations of ‘fag hags’ (she being the 3rd and mother of the 4th), is just one last financial hurdle and very many editing hours away from completion. To find out more about it, or better yet, to make a tax-deductible contribution, click here.

20 years on, it’s about time that Priscilla’s giant stiletto got an equally fabulous Handbag!