THE WILDS OF WESTERN ICELAND – MARCH 2013 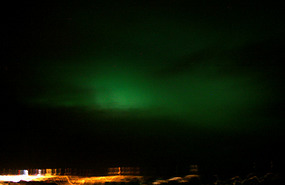 Without putting too fine a point on it, this was the night my whole six week trip was built around – this was the night I went in search of the Northern Lights. For all my hot air about the importance of this potential event, you’d think I’d have built in more buffer around it than a single night but then again, I don’t feel like I ‘built’ the trip at all, it kind of evolved of its own free will and by that point, I had left myself little choice but to trust in its wisdom.

Mum was already with me. I’d bought her along for the ride following recent cataract surgery hoping for the world’s most elaborate celebration of sight in witnessing the Northern Lights. As fortune would have it, my sister Bec joined us too, travelling 37 hours straight to do so ahead of a business trip back in London. Aside from her epic journey and associated jet lag, Bec has also been fighting the flu, exhaustion and various other aches and pains. By the time she arrived, she was so full of medication and empty of sleep that she could barely speak. Unfortunately for her, there was no time for rest, only for a quick shower and change before reporting for active holiday duty. Considering tonight was our only allocated night to look for the Northern Lights, the primary reason for the trip, poor Bec didn’t really have a leg to stand on in terms of staying in (actually, she had two legs to stand on, they were just too tired and wobbly to object). 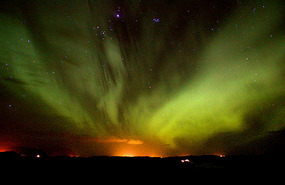 We assembled by the coach parked by the Iceland Excursions office with other Aurora hopefuls. The Northern Lights had been in hiding for days on end so that night’s improved forecast drew quite a crowd. Being more of an independent traveller, I had a concern that this large group dynamic would undermine the experience but I couldn’t have been more mistaken. Our guide, Guðbjork, had us all in stitches by the time we reached the outer limits of Reykjavik with her stories of how her husband had mistakenly thrown away her vintage chocolate tin collection and how she intended to get her revenge.

As we drove deeper into western Iceland, Guðbjork gave us a better understanding of the science behind the Northern Lights aka Aurora Borealis. She explained that there are three main types: the calm or arc aurora (the most common, slow moving, usually green, smudgy streaks across the sky); the active aurora (more intense ribbons of light that swirl and sometimes drop curtains of light tinged with colour that move and fold); and the twinkling or pulsating aurora (quite rare, very active with bright curtains of light that dance). As she spoke, all eyes were glued to the windows and the clouds that still hung overhead. 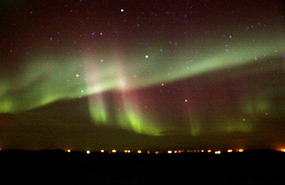 About an hour or so into the drive, there was a hush and a murmur as the clouds to the right of us started to look decidedly green. Guðbjork became increasingly animated as they grew brighter and greener. She kept saying how very unusual it was for the lights to shine so brightly so as to actually permeate the clouds. Ordinarily they drive around looking for starbright sky before stopping because any trace of cloud would usually be enough to obscure the lights from view. This was unprecedented in her experience. The excitement on the bus was palpable, especially for those of us with window seats on the right hand side.

Although the lights were undeniably out in force, they were still behind cloud so we didn’t stop until we found clear skies. We eventually arrived at a spot in western Iceland somewhere near a waterfall (I probably just described a hundred places but I missed the place name, sorry). Unfortunately, the lights had gone back into hiding by the time we alighted and climbed to the top of the freezing, boggy hill in pitch-blackness. The smart people, like Mum and Bec, sought refuge in the cafe that opened in the dead of night to service our party. Meanwhile, a small tribe of diehards like myself set up our tripods and kept a silent vigil in the freezing night air, long after we’d lost all sensation in our extremities (tip for future Northern Lights explorers – don’t wear canvas shoes!). Although there were several of us up there in relatively close proximity, it was quite a solitary experience. There was more than enough room for us all without jostling for position or invading each others personal space. There was the occasional quiet conversation on the edge of hearing but for the most part, I felt alone with my thoughts for which I was grateful. 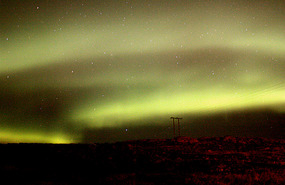 Then came our reward! The sky gently lit with vast green arcs on all sides – the calm aurora. Guðbjork rushed inside to rally the troops to come and see. We shutter bugs snapped away with snap frozen fingers, very slowly – each photo taking 20 seconds or so to expose. I should mention that the long exposure gives a vibrancy to the photos that isn’t always as intense to the naked eye. In fact, I initially thought that tonight’s display of the calm aurora wasn’t as bright as I’d seen it in Alaska 11 years ago but now I’m unsure if that’s because my memory of that night so long ago has been augmented by the photos of it – I just don’t know. Memory can be so slippery. 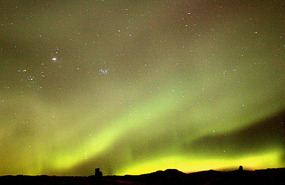 Guðbjork kept spirits high as she danced amongst us singing songs from Hair which lent the occasion a rather appropriate element of pagan ritual. She claimed it encouraged the lights to shine brighter and so they did! Almost on her command, the light intensified into ribbons, picking up speed and dropping shimmering curtains tinged with red – the active aurora! I hadn’t seen colours in the aurora before, only green so I was thrilled to pieces, taking even more photos at a glacial pace. Another benefit of the long exposure is that there’s time between photos to just look up in awe at the magical display of nature. It truly is otherworldly. We stayed up there on that freezing hilltop for well over an hour just marvelling and natures majesty. The lights faded and time came to re-board the bus and head for home satisfied that we’d seen a most spectacular show. All settled in, doors closed, lights off, engine purring, ready to go… then all of a sudden the doors flung open, lights came on and Guðbjork yelled “Get out, get out, the colours are coming!!!”. 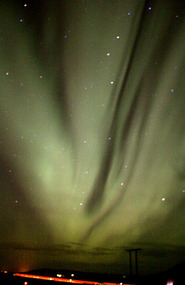 In a frenzy, we all poured out of the bus to find the sky absolutely bursting with light and colour, the likes of which I have never seen, nor imagined! The twinkling aurora! And twinkle it did. It was like the sky was playing with all the joy in the world! Such pure white light with the softest, most radiant pink flickering through it, I wouldn’t have been surprised if it had covered us all in glitter! In all the excitement, I fumbled with my borrowed equipment – my friend’s camera and Inga from Tiny Iceland‘s tripod – unable to get them to cooperate with each other. Eventually, I thrust them into Guðbjork’s hands and pleaded with her to join them up which she did with practised ease. I snapped and snapped and snapped for as long as I could without being left behind. As it was, I was last onto the bus. Despite what I said just above and although I think these last photos were the best of the night, they just don’t capture the magic of what we witnessed and I’m yet to see any photos that do. Everyone was positively giddy including Guðbjork who declared the night to be in her top 5 aurora viewings – as she talked us through the others, tonight’s show crept up to #2 on her list.

The lights continued to dance around us for some time as we wend our way back to Reykjavik. Mum and Bec slept as I gazed out the window contemplating the magnitude of the night. This whole trip was founded on the premise of “Operation Northern Lights” – there was no doubt that I could now declare it well and truly “mission accomplished”. I started off with a determined wish, that night it was made magnificently manifest. At such close proximity, it’s too big to make sense of, it’s going to take some time and perspective to digest. For now, I am happy to remain in awe, to believe in magic and to be a little bit totally freaked out that I asked something of the universe and it gave it to me in all its glory in a very strict deadline. How and where do you send a thank you card for that?! 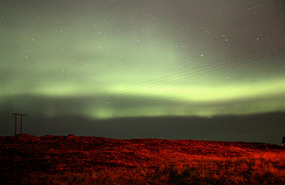 At the outset, when this trip was nothing more than a pipe dream I didn’t think possible, I wrote: “To see the Northern Lights in the wild, weird and wonderful landscape of Iceland would be so many dreams come true that I’d be afraid I’d never dream again but I’d be willing to risk it!”. At the end of one of the most enlightening days of my life, it became time for me to take that risk!